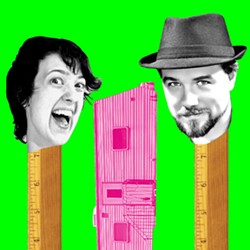 Welcome back to Big Fib, the world’s only cul-de-sac trailer park (even if the Guinness Book doesn’t recognize the record), and setting for singing storyteller Paul Strickland’s last two hit Fringe shows. This year he’s concluding his trilogy with “Tales Too Tall for Trailers,” and he’s brought Erika Kate MacDonald (star of last year’s “Tap Me on the Shoulder”) along to meet his eccentric extended family.

The pair has arrived just in time to entertain at a 70th birthday party for Uncle False, who has demanded a baker’s dozen of bizarre presents like a shrunken head, a silent film and a pirate. Strickland and MacDonald sprint deliriously through 50 minutes of silly skits and songs, high-fiving as they check off each birthday bucket-list item with another outlandish tale from their traveling adventures.

Strickland’s Southern-fried folk tunes are as wittily offbeat as ever, and they sound even better with MacDonald’s vocal harmonies and killer kazooing; she’s also an ace on air guitar. Their storytelling repertoire has expanded to include shadow puppets, flipbook animations, a clothespin keyboard and backward cardboard masks, all charmingly rendered with grade-school simplicity.

In between the groan-worthy puns (wait until you see the “box of ticks”), Strickland and MacDonald share some surprisingly deep insights into the art of pursuing personal happiness, as summed up in their repeated refrain, “Sometimes you have to make magic happen in small surprising ways.” This pair certainly does just that, taking their audience on an easygoing odyssey that is sweet and simple enough to be a children’s show, but sly and sensitive enough to enthrall adults.

During the course of “Tales Too Tall for Trailer Parks,” the fourth wall sheltering Big Fib from the real world begins to crumble, and it all ends in a suspension of disbelief-shattering “St. Elsewhere snowglobe” moment that I’m still struggling with. It’s an interesting but oddly cerebral note to go out on for a series that’s been all about heart; mostly, I just wish the door was left open for these wonderful tales – tall, true, or somewhere in-between – to someday return.

« Mad Max: Fury Road is beautiful may…  |  Depressing study of the day: Orange… »