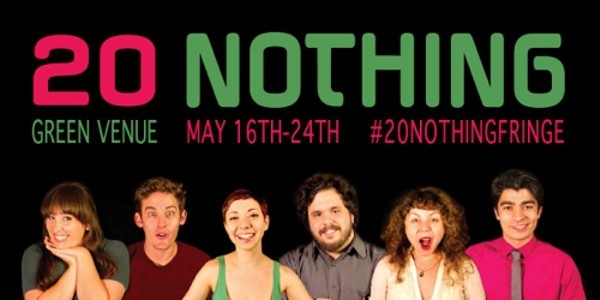 My 40th birthday arrives in August (no presents please, just send cash) which puts me at least 15 years outside the target demographic for 20Nothing, but that didn't stop me from laughing out loud at the snarky satire on today's much-disparaged generation of post-grads. Director Debra Christopher, who co-wrote the script with a half-dozen others, has assembled an ensemble of attractive young comics and inserted them into a breakneck barrage of bite-sized skits exploring sex, friendship, sex, communication, sex, spirituality, and more sex among millennials.

Some of the best bits in the show are a recurring examination of the text-based mating habits of 20-somethings (done in the style of a nature documentary), a yoga session where you can hear the pretentious practitioners' inner monologues, and cacophonous rant about Sally Mae's student loan extortion racket. Other subjects of skewering include unintended pregnancies, alcoholic shots, abusive jobs, and the afterlife. While a few bits fall flat, thankfully none of the short scene-lets last long enough to wear out their welcome, which is a key comedic lesson that SNL could stand to lean.

The guys (Flavio Miliccho, Adam Reilly, Sean Kerrigan) are all fine funnymen, but they are outshone by their female counterparts (Dorothy Christopher, Krista Delong, Serafina Schiano); Christopher and Schiano especially each stop the show with serious monologues on loss and self-loathing that deepen 20Nothing into more than just goofy good time. Even though I have little patience for YOLO, Pinterest, or passive-aggressive Facebook posts IRL, I found a lot more in this show that I identified with than I expected to. And judging by the hysterical response provoked from the opening performance audience, I won't be the only older person to enjoy it. If this show is any indication, maybe there's something more to these 20-somethings than they've been given credit for, at least as far as sketh comedy is concerned.

« Orlando Fringe review: House  |  Are Pixelbots the next step in anim… »