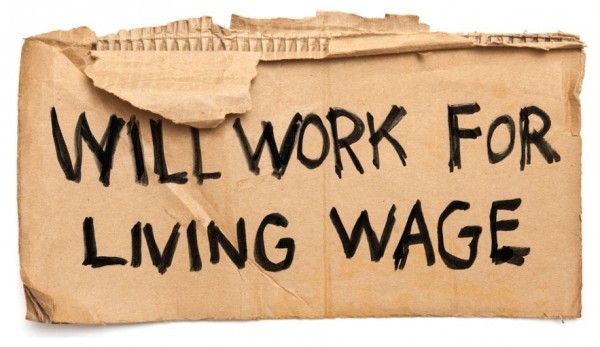 image via matthewsburnabyblog.wordpress.com In case you didn't get an eye- and an earful from the rather spectacular Dec. 1 CBS Sunday Morning segment on living wage issues with fast-food workers, here's a bit of what everyone in this floundering economy is going on about right now:

Twenty-seven-year-old Nancy Salgado's sweet smile may be her most marketable asset in the fast food industry -- that and her willingness to do just about any task . . . "I work at grill, I fry products; making sandwiches, assembling the sandwiches," she told Moriarty. "I work breakfast, lunch, dinner.  I work cashier.  I work drive-through.  I do drink station.  Throw away garbage.  Pretty much that's it." "Do you think [that] people run in to get their fast food, do they notice the person serving them?" Moriarty asked. "No, they never notice.  But I believe that's my skill to be friendly. Even though I'm heartbroken, even though I have problems at home and I have to deal with them day by day, I would still give you a smile." And yet, after working for a decade at McDonald's franchise restaurants in Chicago, she still earns the state minimum wage in Illinois -- currently $8.25 an hour.

McDonald's, to its credit, has been advising its employees on how to best manage their hard-earned finances, which is basically to spend no money on heat (even in the northeastern winter) and to consider getting a second job ... or a third, if your kids will let you. The rest of us, meanwhile, are starting to realize that the end of unionization in this country (not to mention Florida) has seen income inequality reach historic and dangerous levels – a sort of deal with the devil, where the devil at present in Gov. Rick Scott. Today, Organize Florida and the Alliance for a Just Society released a Florida-specific report, "America's Changing Economy: Searching for Work that Pays in the New Low-Wage Market," and even held a conference call (which we were unable to attend, but our sisters at Creative Loafing in Tampa were on) to further illustrate the issue: If you are a single mom working at Walmart and get kidney stones, odds are you're going to lose your job. All of this runs in gross counter balance to Walmart's current advertising buys pledging that there's more to working for Walmart than we know! You can get a raise someday! Maybe become management! Or maybe you're just an actor or afraid of losing your job. Who really knows? But we will ban protesters from our property! Some of the new report's findings are pretty stark.
“The 2013 Job Gap study points to a jobs crisis, in our state and across the country. Florida is home to the second largest population of workers in the country making wages at or below the minimum wage. There are not enough jobs in Florida that pay a living wage, forcing families to make difficult tradeoffs to make ends meet. To ensure healthy families, strong communities and a vibrant state economy, we need lawmakers to raise wages and take a stand for workers,” said Stephanie Porta, Director of Organize Now. To counter the horrible news with more than just troublesome numbers, the folks at Organize Now! are planning an action at the LARGEST MCDONALD'S IN THE WORLD or whatever out on Sand Lake Road Thursday – "Low Pay Is Not OK," it's called, and it will be happening on noon (just like other such demonstrations across the country). If you want to get fired up to join in, here's today's report in full.