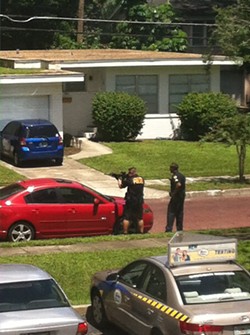 So there we were, minding our own business at Orlando Weekly HQ when we glanced out the window and saw cops with sniper rifles aiming a gun at the house across the street from our building.

Within moments, more cop cars pulled up, and an Orlando Police Department K-9 unit car arrived with a bored-looking Belgian malinois, who was probably hoping to see more action than the inside of his kennel. Sadly, this was not to be his day.

Instead, half a dozen police cars pulled up and surrounded the house. A few more officers pulled their guns, rearranged their cars and demanded over the loudspeaker that whoever was inside come out with their hands up. 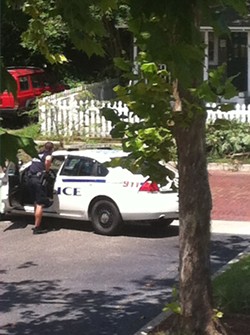 We checked Twitter to see what Tweet3PO had to say about the bad news going down at the house, and all we got was this update:

#SuspiciousPerson 1427 WOODWARD ST 32803 (8/27 12:35) #Orlando #ColonialtownNorth A few minutes later, a scrawny-looking kid in basketball shorts and a wifebeater emerged, hands up, and was cuffed by police.
click to enlarge

Police hung out for a while, watched the house to make sure there weren't any other scrawny teens waiting to come out, then headed out. Big dramz at lunchtime. We don't know what happened yet, but when we find out, we'll keep you posted. **See update and arrest affadavit below.**

UPDATE: We emailed OPD PIO Officer James Young last night to ask for more information about the arrest. Here's what he told us:

"A subject whom officers were advised had a warrant for his arrest on a burglary charge was residing at that location.  Officers saw the subject, who went inside his residence. Additional officers arrived and the suspect came out of his residence and was arrested on the warrant." The arrest affadavit is below:

Neighbors tell us that the house in question has been a source of stress and contention for them for a while.