Inscrutable we: Why the hot kid flicks don’t speak to grown-ups

I guess if I were a run-of-the-mill middle-aged media critic, I’d be worrying right now about which messages the summer’s animated hits are sending to our children. But honestly, screw kids. They’re better equipped than we are to process this sort of stuff anyway – chiefly because they haven’t yet begun the process of unlearning the basic values that we who live in “the real world” continually need to be retaught.

Instead, I’m focused on a different question: What do 2013’s cartoons of choice have to teach us adults? The answer, unfortunately, is “Not as much as they could or should.” For all their other charms, Monsters University and Despicable Me 2 fail to impart much in the way of life coaching a grown-up of the 21st century can take to heart. And that’s a loss. I mean, who do these flicks think they’re for, anyway?

The best Pixar movies have always been autobiographical tales by and for adults. The studio has done some fine work paying tribute to the sources of their own storytelling urges (as in the Toy Story movies) and dramatizing how they learned to shake off artistic criticism and follow their bliss (Ratatouille). But their two masterpieces widened the scope of their inquiry to an experience far more adults can understand: parenting.

Finding Nemo was obviously a parable about letting go of over-protectiveness; its immediate predecessor, Monsters Inc., was just as effective at exploring kids’ fears through their guardians’ eyes. At its most basic level, Monsters Inc. is obviously a story about a gay couple who learn that having a kid is harder than it looks. (That’s my analysis and I’m sticking to it.) More specifically, the film embodies that “end of an era” feeling parents have when their little ones stop recoiling from everything that goes bump in the night. When Sulley realizes that his beloved Boo is no longer afraid of Randall (“her monster”), it’s one of the best metaphors cinema has ever given us for the mighty victories kids score when we aren’t even looking. 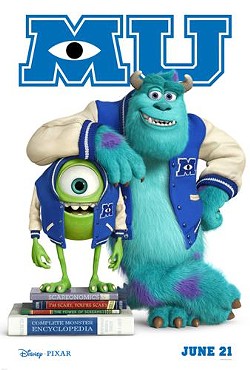 As a prequel, Monsters University unavoidably can’t replicate that sort of dynamic. By hooking up with Sulley and Mike Wazowski before they had ever laid eyes on an actual child, the story robs them of their sine qua non. Instead, the film navigates somewhat different terrain, reaching for a moral that could theoretically have equal value to young and old alike: Just because you desperately want to do something doesn’t mean you have any natural talent for it.

Through most of the movie, Mike soldiers on in his academic quest to become a world-class scarer, ignoring the copious evidence that he just isn’t cut out for it. The message conveyed, that all the desire in the world can’t compensate for a deficit of raw ability, is a valuable one -- particularly for our current culture of YouTube-driven entitlement. But the movie muffs it. In the final sequences (oh, yeah: SPOILERS, or something), we find Mike and Sulley -- who have both been tossed out of Monsters University, albeit for slightly different reasons --  undeterred and working their way up the ladder at Monsters Inc., from the humble mail room to their destiny as company stars.

Suggesting that anybody can rise from an entry-level position to the job of his dreams is pretty unhealthy in our present society, which actually offers less in the way of upward mobility than most “civilized” cultures. Beyond that, though, you have to reach back to your memories of the original Monsters Inc. to realize that the denouement of the new flick is also a lie. Mike does not become a star scarer; he merely becomes the trusty tech support for Sulley, who as we learn in Monsters University, simply has the right genes and family connections for the gig. (His ascension to his rightful position is only stalled momentarily by his own bad attitude.) The Pixar team does its best to hide the new film’s true lesson, which is “Try hard enough, and you might someday get to stand next to the guy who’s doing the job you always wanted.” For that true-to-life downer of an arc, you’ll have to watch the two movies back-to-back when they’re both available for home viewing.

To its credit, the Despicable Me franchise is predicated on the understanding that the system sucks. The delight of the 2010 original lay in its choice of “hero”: a master criminal dying for an equal opportunity to steal. Less than two years past 2008’s  enormous economic collapse and controversial bailout, adult audiences knew just what they were seeing when the perennial underdog Gru was turned down for a loan by the Bank of Evil (“Formerly Lehman Brothers”), in favor of a lesser mastermind who just happened to be a blood relation of management. Everyone with any sort of power, the movie proposed, is corrupt; the ones you root for are the ones who have to work at it.

The film’s genius was to team Gru with a trio of orphan girls who were similarly behind life’s eight ball. In a pivotal scene, he recognizes his kinship with them after a carnival worker cheats them out of the stuffed unicorn they have won fair and square. Gru’s response is to lay waste to the game with a flame-spewing weapon; the girls, delighted, ask what other boardwalk fixtures they can destroy. It looks like the beginning of a beautiful fiend-ship.

Despicable Me 2, however, fails to meet its audience three years farther down the road to disillusionment. In fact, it’s headed in the opposite direction. While there’s a certain amount of catharsis in watching Gru try to adjust to family life -- what suburban homeowner wouldn’t like to spray his nosey neighbor in the face with a hose or let his snaggle-toothed “dog” loose on another’s lawn? -- the movie misses numerous opportunities to indulge his misanthropy on a greater scale. The plot has him recruited by a top-secret spy agency to help take down a mysterious master criminal. Starved for action, Gru grabs the chance to reinsert himself into the world of elaborate gadgets and cool vehicles. But that was never what Gru was about in the first place – high-tech was just a way for him to get revenge for a lifetime of slights, both real and imagined. And working for “the good guys”? It’s a notion as absurd as expecting us to take it on faith that such a thing exists anymore.

Instead, a Gru of 2013 would be better depicted as a man without a country – an angel of anarchy with three highly suggestible little cherubim to help him accomplish his aims. Saturday Night Live has found some good (if misguided) fun in portraying Julian Assange as a Bondian international threat; how natural and satisfying it would be to see Gru in that role, using his knowledge of the global snooping network to metaphorically pants everybody. He could be the whistleblower who blows his whistle REAL LOUD AND RIGHT IN YOUR EAR, just to see the look on your face. And what parent wouldn’t delight in watching some of that – especially a parent who’s first facing the realization that sending his kids to college might be as difficult as robbing Fort Knox?  Let’s post everybody’s emails on the Jumbotron and see who’s left solvent!

Don’t get me wrong here: Monsters University and Despicable Me 2 aren’t bad movies per se. They have laughs, and strong animation, and a few moments of real tenderness between them. But neither does much in the way of capturing the zeitgeist as a thinking, feeling grown-up of today would perceive it. And neither really wants to try. These movies aren’t genuinely “about” anything; the only thing they have to say is the lesson implied by their very existence, which is that once something has been proven to make money, you should keep doing it until nobody cares anymore.

Not only is that a cynical philosophy, it just isn’t applicable to life as a downwardly mobile adult like me knows it. And if my cartoons don’t teach me something valid about the world I have to live in

well, how am I ever supposed to learn?

Days without a response from the publication that plagiarized from me and won’t come clean: 18.