Five other cultures Disney should try to trademark next 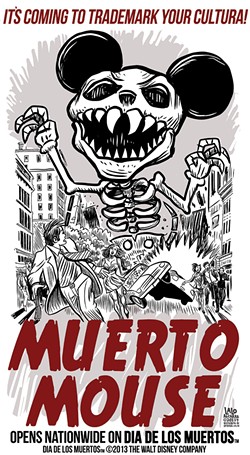 The Big Brains at Disney and Pixar Animation HQ tried recently to trademark the term "Dia de los Muertos" – Day of the Dead –  so they could co-opt it for marketing an upcoming Pixar film about the Day of the Dead celebrations. We're sure it'll be a completely adorable rendition of the traditional Mexican holiday in which people gather to celebrate their dead friends, relatives and ancestors. And we are certain the company would have portrayed the cultural traditions and iconography associated with Day of the Dead and the Mexican people with extreme sensitivity (see: Pocahontas, Mulan, The Princess and the Frog, etc.).

Apparently, after a massive social media backlash, Disney changed its mind and has withdrawn its trademark app, which would have allowed them to plaster their own rendition of Day of the Dead imagery on everything from coffee mugs to toiletries to backpacks and snowglobes. (OC Weekly lists the kinds of things Disney hoped to trademark in this blog post.)

In honor of their culturally insensitive blunder, we've come up with a list of other cultures that Disney might want to consider using for future plot lines – ones that are populated by people who are maybe a little less sensitive to their portrayals in the media and who might actually embrace a Disney co-optification of their icons for marketing and promotions. Hell, if you ask them nicely, they might even tattoo Disney's logos to their foreheads.

Honestly, what is more Disney than a culture that claims to embrace "all walks of life" as juggalos do? Our hero would be a woman, feeling lost in the world until she encounters juggalos who show her you don't need anybody else when you've got a face-painted family. Whoop! Whoop!

With locavore movements and a popular focus on family-owned farms, now would be the perfect time for Disney to create the Gretchen Wilson version of a princess, a girl-next-door who's wild and just looking for a man to put her in her place. I mean, that's what happened in The Little Mermaid, right? Part of your wooooorld.

As Aladdin proved, there is no shame in rummaging through the trash for food or squatting when you don't have a place to lay your head, but of course, our freegan princess would have a much happier ending than the streetrat because she would show others how to fight the evil of corporations. And she wouldn't need to rule Agrabah on high to convert a legion of followers away from the mind control of consumer culture sorcery. Just maybe a little Disney magic.

Obviously, Disney has done the whole goth thing to death with The Nightmare Before Christmas, but they tucked it away like a monster under Touchstone Pictures' bed of work, and it's probably about time that they gave into a little darkness to cast a sulking princess who charms the world in spite of their preconceptions by delivering honest criticisms in a dry monotone that help everyone in town change for the better. Like Belle did in Beauty and the Beast, only minus that godawful gold dress.

A young frosh pledges a fraternity for the first time and discovers that it's really hard to chug beers, do bros' homework and be cool ... until he meets PledgeMaster Kopnick, who teaches him that there's more to hazing than meets the eye. A true coming-of-age story.