Teresa Jacobs relents! The Domestic Partnership Registry (or whatever it is) now actually includes domestic partners 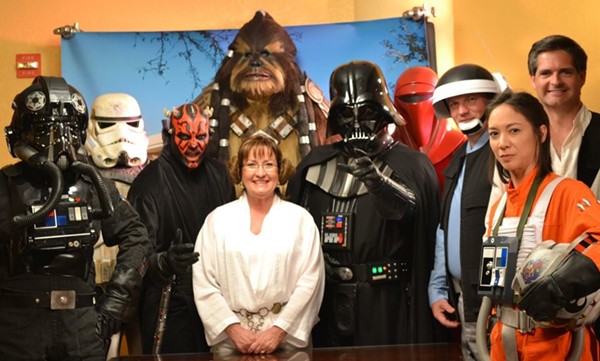 In what can best be described as an unexpected move – or a birthday present for Billy Manes (me! May 22! 40! Yikes!) – Orange County redrafted its innocuous HELP ordinance yesterday to something way more palatable and fantastic than it was just a week ago. We'd like to believe that our impassioned plea in this week's Happytown™ column (or our use of Teresa in Leia buns) had a role in this, but we know Orange County Mayor Teresa Jacobs isn't very fond of us, and we also know that the fine folks at the Orlando Anti-Discrimination Ordinance coalition have been working their asses off for the better part of two years on convincing her that gay people matter. So it's not really about us, anyway. Regardless, this is a victory on many levels: Domestic partnership will be more than just "friends" in county law (if this passes), there are judicial remedies included, basically everything that OADO asked for is in there. Below you can find the full revised text of the ordinance (look out for the underlined portions and strike-throughs; they're new!).

OADO superman and executive director of The Center Randy Stephens says there doesn't seem to be any real issues with the new draft, amazingly. "We have all reviewed it and keep looking for a Trojan Horse, but cannot find one

.. this is what we originally hoped for

I am sure there will be a few little tweeks but we really do not anticipate any major changes," he says in an email.

Still, if you care about or are a GLBT ally, please show up at the county commission meeting on Tuesday, May 22, wearing red. Tell your story. Make yourself known. Be a better person.